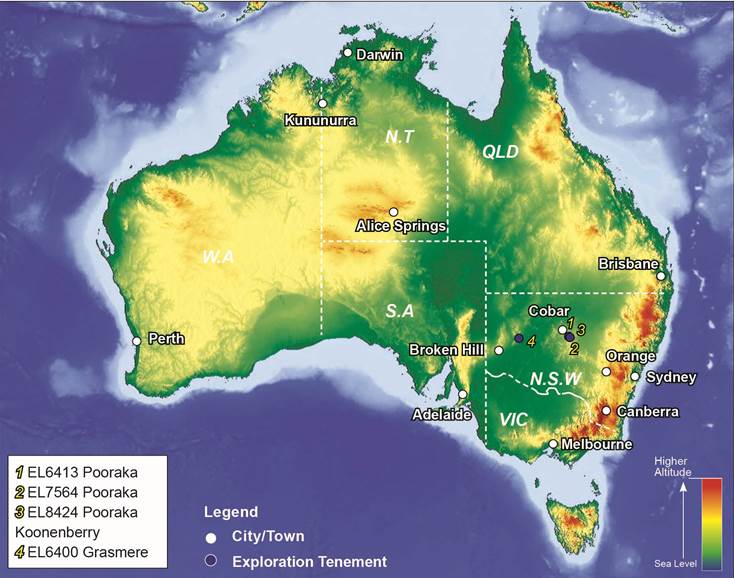 The NSW tenements of Pooraka are within the Lachlan Fold Belt, which is the primary focus for most gold exploration in the State. The porphyry style copper-gold potential of the Ordovician rocks of the Lachlan Fold Belt is highlighted by such mines as Northparkes, Cadia, Cowal, Wyoming, Gooleys North and Newcrest’s new porphyry system at Buryon, northwest of Bathurst (196 metres @ 0.26% copper and 1.6 grams/tone of gold). In the western area of the Fold Belt the major Cobar base metal mineral field has likewise produced some major exploration success from both near-mine and greenfields exploration such as at Hera and Wonawinta and at Mt Boppy.

Many of these discoveries are the result of further investigations of previously explored areas to test extensions of known mineralisation.

Examples of this successful brownfields exploration include the east Cadia and Ridgeway deposits and Cadia is now ranked amongst the top ten porphyry and epithermal copper-gold systems in the world. There were also many smaller discoveries that seem likely to amply reward shareholders for the exploration risk of going over ground already well explored in the past.

NSW is second to Western Australia in gold production and the Fraser Institute rates NSW third in the world for world-class mineral provinces and as a preferred destination for mining companies.

In NSW the cost of production of gold per ounce is among the lowest of any State in Australia. The cost of discovery in NSW is also low by international standards.

Ausmon Resources has a program which will adequately advance the exploration of the tenements and delineate drill targets and has access to an experienced group of consultants to carry out the work.