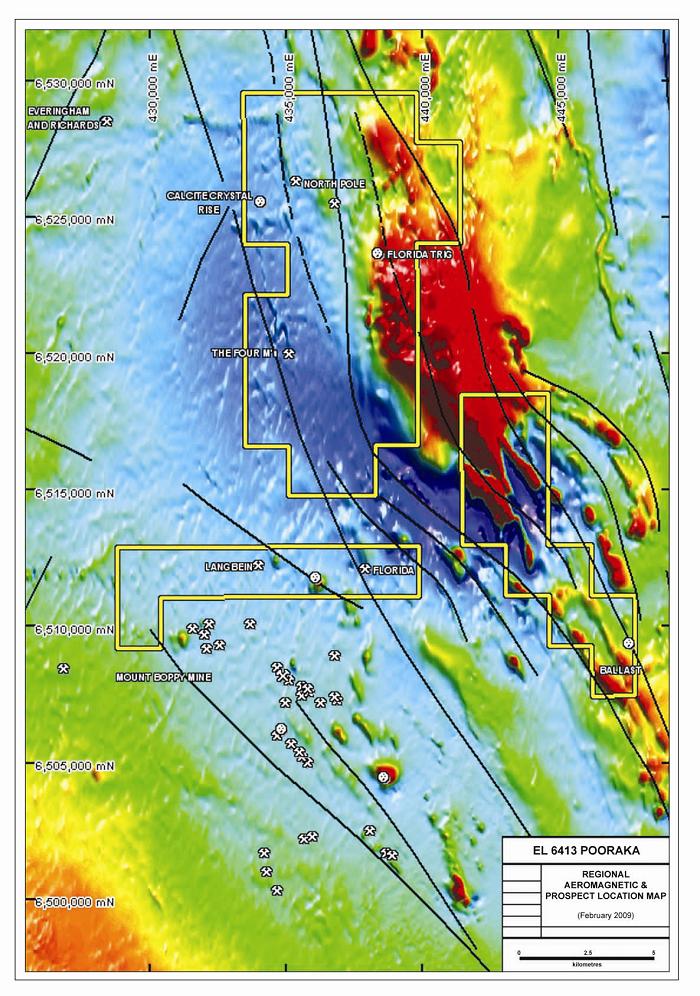 EL 6413 covers 147 square kilometres immediately north of the Barrier Highway between Nyngan and Cobar. A gravel road and dirt tracks provide reasonable access and the land is used for low density sheep and cattle grazing.

The tenement straddles the prospective Gilmore Suture represented here by the Coonara Fault and is prospective for structurally controlled epithermal or replacement-style gold mineralisation similar to that at Mt Boppy, which is about 4 km south and along strike. Mt Boppy had an historical production of 0.5 million ounces of gold at an average of 12 grams of gold per tone (g/t Au). It is also along strike of the developing Hardwicks and Birthday projects, with intersections of 18 m @ 6.78 g/t Au and 5 m @39.8 g/t Au respectively.

Past exploration at Pooraka has almost exclusively concentrated on discrete bullseye (thumb print) anomalies at the expense of prospective shear zones (magnetic linears), of which at least 25 are known. Recent but limited work by the operator has concentrated on these magnetic targets with some success, locating a number of strong bedrock gold anomalies including Area 5-a previously un-drilled part of North McGuinness, where samples collected along 7 lines covering an area about 300 metres square, yielded 15 anomalous gold results and also 15 anomalous lead samples representing some 100 metres across strike.

Other targets include the highly prospective (ferruginised/ silicified, base metal anomalous) Florida Trig/ Chert Ridge/ North Pole zone, which runs up the middle of the EL, and a large magnetic anomaly in the east of the EL.

Immediately to the south of the southwest corner of the EL, there are some interesting intersections at the Hardwicks prospect (18 m @ 6.78 g/t Au) and Birthday prospect (5 m @39.8 g/t Au). The enclosing rock types trend onto the EL immediately along strike.
Within the Pooraka tenement there are several gold and base-metal prospects. The McGuinness Gold (Budd’s, 4M’s) and the Calcite Crystal Rise (Pb) Prospects are proximal to the Gilmore Suture. Base metal prospects- North Pole, Chert Ridge, U.A.M., and Florida Trig occur in the north adjacent to the Tooram Fm. The UAM Prospect has a discrete subtle magnetic anomaly.

Most mineralisation in the Cobar Mining Field is closely connected to faults, with orebodies being pipe-like and contemporaneous with cleavage formation. The EL contains a number of previously worked mines in Girilambone Beds/Ballast Cherts (sediments and tuffaceous volcanics – similar age to Cobar Supergroup host rocks). A number of small gold and base metal workings are present, some associated with magnetic anomalies and high metal grades; these include magnetic anomalies centered on the Florida and Pooraka areas

Gold targets include:
North Pole, which gave rock chip values of up to 80 g/t Ag and anomalous Cu, Pb, Zn in chert and ironstone in a 4.5 km long x 200m wide epithermal silicified zone.
McGuiness (Budds Tank, 3M) that was worked from 1932-35. The workings are in Girilambone Group and have similarities with the Mt Boppy mine geology and mineralisation. A sub-economic Indicated Resource of 15,000 t at 2.2 g/t Au is present down to a depth of 12 m.

Base metal targets comprise lead anomalies with associated base metals and some silver and gold. These include:
The Calcite Crystal Rise; Mapping and geochemistry was carried out in 1978 on two parallel gossanous veins in metasediments with low basemetal values.
The North Pole Prospect; Geological mapping in1978 located up to 80 g/t Ag and anomalous Cu, Pb, Zn, Ag in chert and ironstone in a 4.5 km long x 200 m wide chert and ironstone zone of the Girilambone Group.
Chert Ridge; a possible stratigraphic horizon with syngenetic basemetal mineralisation in brecciated sediments of Girilambone Group. Bedrock geochemistry was carried out in 1980
Florida Trig; 1978 located up to 2.8% Pb in jasperoidal magnetite-chert float.
The UAM prospect that has magnetic and geochemical anomalies possibly indicative of Elura (Endeavor) type mineralisation. The anomalies are principally lead in association with a pyrrhotitic gossan
The Langbein prospect; worked in 1906 and prospected in 1983. Shallow pits are associated with anomalous Au, Pb, Zn in ironstone within the Girilambone.

“U.A.M”; this is a magnetic anomaly coincident with a gravity anomaly of 0.5 milligals. It was tested by 19 auger holes totalling 801 m (average 42 m), which delineated a coincident weak Pbanomaly, 200-300 ppm with a peak of 1,000 ppm and a background of 30 ppm. The likelihood of an “Elura” style source was considered to be highly speculative.

“The Spur”; a large magnetic anomaly can be attributed to a mafic or an ultramafic intrusives at depth. In the Ordovician Ballast Beds and Cobar supergroup, this was located with ground magnetics. Historic geochemical surface data were disappointing.

“McGuiness North Gold Prospect ”; in the 1980’s exploration was focused on the McGuiness Gold Prospect, which was interpreted to be at the Cobar Supergroup-Girilambone Group contact. Work comprised mapping, sampling, magnetics and IP, followed by 17 RAB holes and 8 RC percussion holes.

“Langbein Gold Prospect”; this gossanous, gold anomalous area near the EL’s southern boundary, appears to have been largely overlooked historically and is apparently under explored. 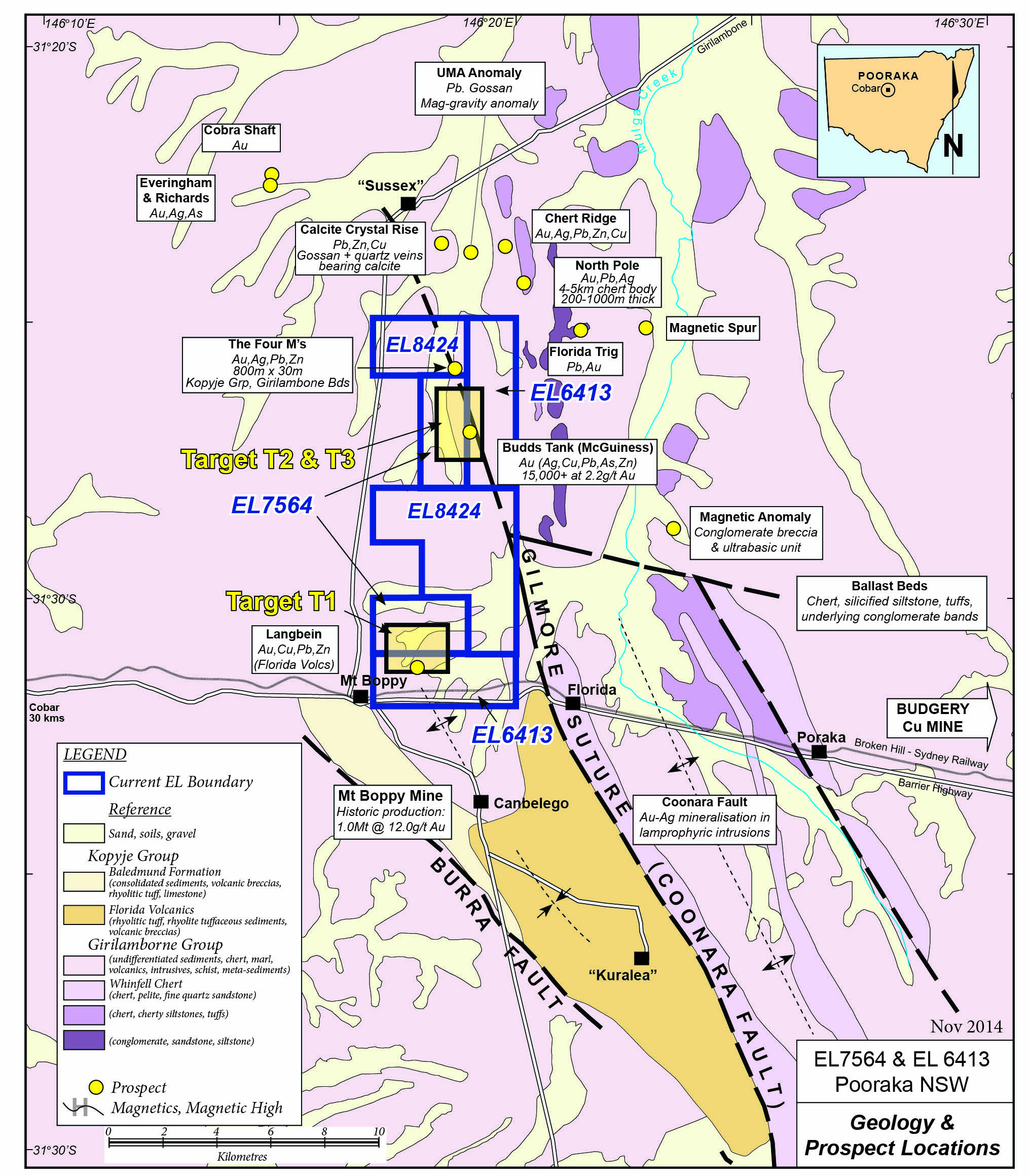